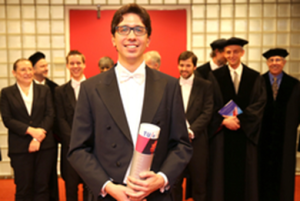 The aim of this PhD work was to investigate the Multi-scale modeling of plasticity and damage of lath martensite in multi-phase steels. During this PhD research, Francesco Maresca investigated the key physical mechanisms underlying the plastic deformation of martensite. Based on that he developed a computational model to describe plasticity and fracture of so-called multiphase steels, steel consisting of a mixture of martensite and softer forms of steel.

Starting from November 2015, Dr. ir. Maresca is working as postdoctoral researcher at the École Polytechnique Fédérale de Lausanne in Switzerland.