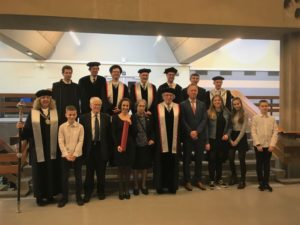 Astrid worked on the project within FOM-M2i Industrial Partnership Program ‘Physics of Failure’ in collaboration with Tata Steel and SKF. In her work she studied the micro and nano phenomena responsible for damage initiation and failure through modelling at atomistics scale. Within a multi-scale approach of plasticity and fracture, this project aimed at developing a cohesive law for the mixed-mode behaviour of an interface between a soft bcc material and a hard anisotropic second phase (including precipitates and inclusions).

We would like to wish Astrid success in her future carrier.